Time for a little NAP 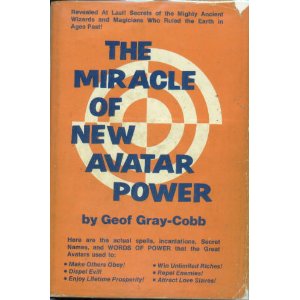 Awhile back, Brother Moloch posted his Three Part Review of the Miracle of New Avatar Power, a grimiore written in the 70’s in a cheesy “These people did it, and SO CAN YOU!” style. Previous to him bringing it to my attention I had never heard of it before. If I had seen it, I would of disregarded it right away. It’s one of those books where if I saw it in the used book store I would of laughed and not opened it even if it were marked for a $1.00 (It goes for over $200 on amazon for a used copy btw).

When Moloch wrote so glowingly about it however I decided to check it out. Apparently it has a huge following, and even a whole forum dedicated to it on evocationmagic.com. Let’s just say I “procured” myself a copy and leave it at that ok? *cough cough* 😉

Apparently the lore is that Mr.Cobb channeled the contents while under a trance. It’s written in a very cheesy 70’s style while tons of “testimonials” that remind one of an infomercial. Interspersed between these are various incantations and evocations for summoning spirits for various purposes. There’s also instructions for calling a type of constructed familiar spirit called “the magical mentor”, instructions for astral travel, how to work with a pendulum and various shields and curses. The main ritual is a relaxation ritual which serves as an “opening of the gates”, followed by the basic GD middle pillar and then a small excerpt from the bornless one ritual. It can be fully executed in about 15 mins. Moloch goes into a full in depth explanation so I won’t bother here.

I’ve been wanting to get into grimiore work for awhile and decided this would be a nice first cutting of my teeth, I figured it would be a stepping stone, I’d try a few evocations and then move on to something a bit heavier. I was absolutely blown away by the power and the results, and was unprepared for how much I genuinely liked it. Now I’m thinking it will be a staple in my practice instead of just a “stepping stone”.

I tried two of the evocations listed. I asked for two things that were difficult, but not impossible. In both cases I had complete manifestation of the goal by the next morning. In one case, not only did my goal manifest, but I got way way more than I asked for and had a series of good fortunes after that. I asked for a 50% result and I got a 200% result. Consider me impressed. Who says a grimiore has to be ancient to be powerful?

I also like the ease of the incantations. Their easy to perform, easy to memorize and their one of every occasion. The magical mentor is a cool addition. I’m working towards achieving K&C of the HGA, but this will be useful in the meantime. It’s a very useful and helpful spirit in my opinion.

Once you get past the cheese, there is some serious power in this little book. I’m very surprised and delighted at how much I’ve been enjoying it. I feel like someone who’s coming to the party late, considering it seems like everyone knew about it except for me. Better late than never I suppose. I’ll probably still move on to something heavier in time, but I won’t be shelving this one. I can see myself using it for a long long time.

10 Responses to Time for a little NAP