Dude, I know the feeling.

Let’s start with another story! The year was 2005 and I was having coffee at borders on a date which would be the first of a new relationship, unbeknownst to me at the time. Of course neither Borders nor the relationship fared well in the end!

Our first date get-to-know-you banter (you all know what I’m talking about) got around to self-perceptions and I related something that I had never fully realized until that moment and it came out of my mouth. Whenever I try to put myself in a box, I stuff myself in, I stay there for a bit and then come bounding out of the box going “Whew that was really uncomfortable!”. No matter how big and spacious of a box I think I find, I eventually get tired of contorting myself to fit inside of it, no matter how badly I want to live inside a box  (Later I’d find out that snippet of the conversation was the clincher in assuring there would be a second date).

Recently, somewhere along the line I came to the conclusion that I’m just fundamentally a Chaos Mage somewhere at my core no matter what box I’m currently trying to stuff myself into.For those who have followed by blog from the begining over at Oak and Ivy, you know what I’m talking about.  For me, CM is the operating system that allows me to live inside all my boxes at once. Kinda like… the box garage! Every step I take on my spiritual path reinforces the fact that no matter what system I follow, it’s not completely 100% correct. It may be a good fit, it may provide me a valuable spiritual Truth, and I may practice it faithfully according to the guidelines of the tradition for the rest of my life, but I just can’t bring myself to say “Yup, this is the way that it is”. If magic has taught me anything, it’s that every time I think that, every single time, I get my ignorance papers handed to me hard by the Powers That Be. I have a whole metaphysically stack of Papers on my altar right now reminding me.

At best I only ever have part of the puzzle. I don’t want just a single puzzle piece, I want to admire the whole puzzle in it’s vast incompleteness, even knowing that I’ll never be able to finish the puzzle. There is beauty in the not knowing, in the mystery.

Put simply, for me (again NOT attempting to speak for others, not even going there!), CM is simply the mindset that no matter how much I know, I really know nothing. It really comes down to being that simple. It’s keeping a flexible mind. It’s keeping an open mind. Its seeking a higher vantage point at all times, even if I know I can never reach high enough. It’s about retaining that sense of wonder that propelled me to become a magician in the first place. It’s really all about the wonder.

Remember when you were a beginner on the path and you thought everything was possible? Remember all those adages about maintaining the beginners mind? In my mind, CM is a built in fail-safe to make sure you retain the beginners mind, even when you’ve progressed so far along your current path that your obsessed with doing it by the book.

It does not mean that you can’t participate in a revel in the wonder and glory of a traditional system. It’s not so much about chaospheres and random belief or conjuring fictional characters (although I must admit I find chaospheres rather aesthetically pleasing). Did those things characterize the movement in the past? Sure! Do people still presently do them and get results? Yes, and I’m not going to be one to cast judgment on what works for others (been there, done that, it made me feel like an asshole. Rightly so). I’ve seen some crazy shit in my time. Hell, I’ve invoked angels and conjured up aliens instead on occasion. Not just once, but often actually. I don’t know what the nature of angels and demons and spirits are but I’m pretty sure we don’t have the whole story on that. I think it’s hubris to try to claim to honestly. Also, some recent work with servators has brought me results above and beyond what I had been able to achieve with traditional spirits on the same goal. 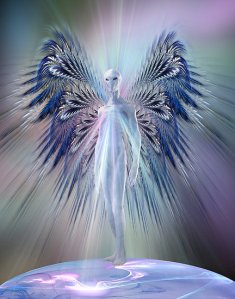 Meet the Spirits of the Sphere of the Moon, as they appear in these parts.

However, for me the greatest strength of CM lies in the mindset. Read that last sentence again because it’s the crux of my whole point there. It is the mindset that I find absolutely freeing. It is what I keep coming back to year after year.  It’s about the fact that the farther I get on this path, the more I realize I know jack shit. The more experiences I have, the more my previous closely held schema of the universe gets blown to hell. I think if boiled down this the flag ship of the whole movement if you will, it’s this core concept of flexibility of belief that is important.

Belief. like it or not it’s so malleable. This is something I’ve proven to myself my whole life. I’m not going to say that I think belief is what fuels magic, because I don’t personally believe that (hehe). I think belief is totally irrelevant to the practice of magic. I am much more on the Everything is True, Everything is Permitted side. I will say that I simply don’t know what to believe as “true” and that belief itself is what chains me to those boxes I find so uncomfortable.

So it hit me yesterday as I was driving down the road on a forced tour of the countryside due to a construction detour, which of course is conducive to contemplative thoughts about life paths. It hit me hard. I don’t think I have a choice in identifying as a Chaos Mage any more than an atheist has a choice in rejecting the concept of God. It’s just what you believe. It’s just simply my beliefs about the nature of belief itself that make me one fundamentally at my core. I can either except it and move on, or spend my life living in one box after the next looking for a more comfortable fit, a tolerable fit.

To me it is also a path of balance, incorporating both the High Magic that I have come to love and the primal/shamanic/witchcrafty/Druidic magics that I crave without placing inherent worth on one over the other. Now do I need CM to do that (I can hear you all saying it)? Nope, but I sure find it makes it easier. I believe Gordan said it best actually

You don’t need chaos magic to shine a little empirical light on your practice but nobody shines it better than chaos magic. I am willing to be convinced otherwise but it has yet to happen.

I’d fully agree with that.

So that’s how I now find myself on a predominately (Post?) Chaos based path. I really don’t expect what I do to actually change much.  It does not meant that I am giving up on Hermetics, or the Great Work, my traditions, my gods, or my goal of becoming a living god on Earth myself, but in the end, my home base will not reside in any one box. I find it just hobbles me too much.

20 Responses to A Chaos Diatribe (Part II): Life in Boxes