Purpose: To invoke the Archangel Uriel to grant me the Earth initiation.

I prepared a laman with Uriels name. No sigil, as one does not exist. I used the rite as previously, from the Modern Angelic Grimiore. I asked for Uriels presence. This time I did not see any image in the crystal. I did however see floating lights around it, and I felt like I was floating and the table in front of me was too. I took this as confirmation the angel was present.

I asked for the initation. The words I saw at first were:

“He commands me from afar to come, and I do so”

I ask first for a personal sigil to use for the next 40 years. I see an image in my head and write it down. I then ask if he will grant the initiation. I am told to try again when I am more prepared. I don’t necessarily like this answer, and wonder if I misheared, so I broke out the pendulum and asked the question “Will you grant the initiation at this time”?. The answer is No.

I ask “Will you grant it after I have meditated on you image and sigil and try again in the near future”? The answer is yes.

I read the license to depart and dismantle the altar. I copied the sigil I was given onto the lamen.

I will meditate on it, and the Knight of Earth card from the Crowley tarot for the next week and try again.

So I’ve decided not to do any other work except for meditation type stuff for the next few days. The goal is to impregnate my sphere/aura/nemmaton with Earth and Uriel so aid in my next conjuration. I started off by doing the middle pillar, which I might add I have not done in YEARS, and meditating on The Knight of Disks from the Thoth deck, and then meditating on his sigil inside the lamen I had drawn it in.

Interesting experience happened while i was meditating on the sigil. I got drawn in and found myself in a Victorian hedge maze of sorts in the shape of the sigil. I walked the maze/sigil from the inside to get to know it better. It strikes me that this could be a useful technique for any sigil, entering it and walking it to integrate it’s meaning. I’ll have to remember this one.

Interestingly enough there was also a time dilation. I felt like I was down there for about 20 mins at the most. When I came up and hour and a half had passed.

SO last night I reattempted the Uriel invocation for the Earth initiation. I had spent all week meditating on his sigil, the tarot card, and preparing myself. I also memorized the first half of the ritual (having to resort to index cards for the second half. Still, you know.) I felt ready. The altar was prepared as follows: 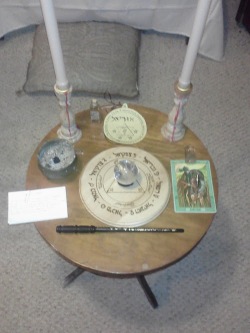 So I began the ritual the same as last time. Again, I got the floating sensation and shapes started to move within the crystal. The only image I saw in it though, was a silhouette of a goblin sitting on a rock. (?). I have no idea what this means, but it wasn’t Uriel. Still I felt Uriel was present, and he confirmed this when I asked. I just don’t get visible manifestation with him like I did with Gabriel. <shrug>.

I asked for the initiation and this time he granted it. I was slightly frustrated because I still have trouble differentiation “spirit speak” from my normal mind chatter. What I heard, whether it be me or him was:

” I’m opening the forces of Earth into your sphere now. You don’t need to do anything just relax and let it happen. In the next week work on integrating these forces which have been released”. I saw an image in my eye of doors opening and unlocked  in my aura and the energy spreading like dye in water.

I then gave the license to depart. Not more than 30 seconds after this there was a huge THUD and crashing sound above me in the living room (my ritual room is in the basement). My wife was asleep and it sounded like something heavy just crashed. Later upon going up I saw nothing out of place. Was this a physical manifestation? Was this him leaving? It was timed perfect and I saw no explanation for the thud.

So on Friday I sat down to meditate on the Prince of Disks again to integrate the powers of the Earth initiation from last week. I quickly found myself in mental communion with Uriel. He urged me to go ahead with the second part of the initiation, which is the invocation of Amaymon, the Prince in charge of the element of Earth. At first I didn’t want to because it was late, later than I usually stay up and I didn’t want to go through a whole invocation, but he was pretty insistent. So I went for it. Thankfully I had previously written out Amaymon’s Lamen in preparation earlier in the night.

Amaymon is technically in the demon family, so your supposed to invoke under the protection of the archangel in charge of that sphere. So first i invoked Uriel. Once he was present, I invoked Amaymon under Uriel’s auspices.

Again, I saw only vague shapes in the crystal. Uriel urged me to use the technique he had taught me, and I closed my eyes instead (It was very “use the force Luke”).  I received a vision of Amaymon. He was grey, and wore a black cloak. He was kind of cool looking honestly, I’m not sure what I was expecting. I asked him to each me the tips and tricks of Earth, to allow me to see the denizens of Earth, and unlock it’s potential with me. He bid me come close and give me his hand. Uriel urged caution. I felt no malice from him, he very nicely put a black rock in my hand and closed my hand over it with his.

“Have the angel install this” he said. I have it to Uriel who kind of pressed it into my back. As he did so I saw all sorts of Earth related images, and a few magic symbols that I’ve never see before.

He also told me that I have to continue now. I can’t stop because I’ll be unbalanced with only initiation into Earth. This is the point of no return, I must finish all of the initiations now. Forward is the only option.

I then opened my eyes and started to dismiss. Then I was like “OH WAIT, don’t go yet!”.

I forgot to ask for a sigil! I asked for his sigil and saw a vision of it. I recorded it and then dismissed both entities.

1) How much of this is real and how much is made up? Am I really invoking these beings or just imagining all this? I think it’s a healthy question to ask. Amaymon did “feel” real. He didn’t seem demonic at all. He wasn’t warm and fuzzy either, but I kind of liked him. I mean if he were a person he’d be someone I’d hang out with.

2) I’m not seeing much in the crystal like I did before. Of course when I did with Gabriel, well Gabriel rules over the moon and psychic experiences. His sphere rules over all seership. If was going to get fireworks with anyone it would of course be him! Other entities may not manifest so easily.

I finished up the Earth initiation by doing the Earth-death meditation from Jason’s S.S. course.  Also the aftermath of the Elubatel ritual smacked the shit out of me. Everyone says working with that entity causes depression. I didn’t think it would in me, but it totally did. I was depressed for about a week. Combined with working with Earth I felt so heavy I could barely move. I didn’t want to do anything. I was also very materialistic focused during this time. I didn’t expect to actually feel any difference, thinking the initiation would be more “spiritual” than physical, but I did indeed experience physical symptoms. The depression was the worst.

I did a divination to see which element I should do next. Air came up. Of course this makes sense, being that air is the balancing element to Earth. It would seem foolish NOT to do air next. Thank god for meaningful divination. Ok air is next.