Hekate Einalia and Dionysos of the Deeps 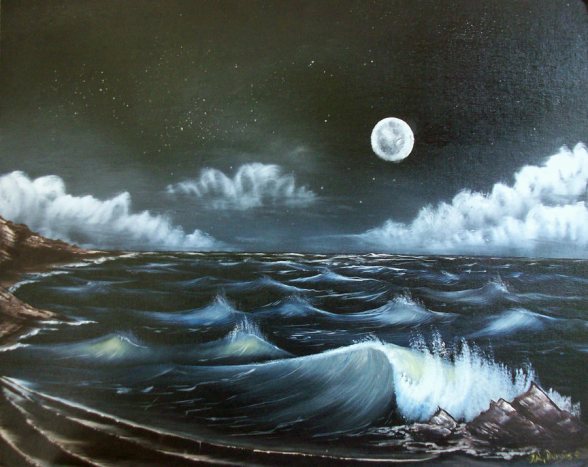 Just when I think Dionysos is gone for good, he reminds me that he is not. Last night I tried a new technique to induce lucid dreams. It did not work, I did not dream lucidly. I did however have a spectacular dream none the less.

I am at the ocean side in Florida (the only place I’ve ever spent any considerable time at the ocean). Tee colors are bright and over saturated. A rectangular canvas painting is on a easel in the sand in front of me. It’s done in oils. It also is of an ocean scene. To the left Hekate stands in the shallow waters, covered with sea weed and various sea crustaceans. Around her dance a ring of figures holding hands around her. They are beautiful sea nymphs mixed with strange sea spirits, some lobster like, other with fish heads and fins, and one shrimp like being. They worship and adore her. Beneath her in ancient greek (which apparently my dream self can read) says “Hekate of the Sea”.

To the right the waters are deep and dark, the waves cresting with white caps. Dionysos rises out of the depths, covered in regal robes and clutching his thrysus like a rulers staff. A ring of figures dance and cavort around him as well, ecstatic maenads made entirely out of blue and white sea foam. Beneath him it says “Dionysos of the Deeps”.

I’m struck numb by the beauty of the piece. A old man in a flowered shirt walks by holding his bag of Cheetos and gnawing on them dumbly. “They dont make art like they used to” he says. ” I’ve got this picture of some dogs playing poker at home, now that’s art!”. I’m distracted from my rage by an chubby little boy who barely looks away from his Nintendo DS screen  to say “Whats that’s supposed to be? It doesn’t make any sense.” Then a horde of people gather around to criticize it and pull it apart.

I feel a tug at my sleeve and it’s my (deceased) father. This fact does not register with me, I just realize that I haven’t seen him in a long time. He says “Lets get out of here before the others come”. We relocate to an outdoor cafe and drink coffee. He is still gaunt and deathly white, yet he speaks with ease and without pain. Our conversation is natural and not filled with any of the awkwardness it was in life. He asks “So what do you think the picture means?”. I say:

“The water represents the human mind. The reason Dionysos is in the deep ocean is because it represents the deep mind, the unconscience that is hidden from us. Thats why he is so hard to reach sometimes. It’s not that he has left me, its because he has embedded himself so deep that I can’t perceive him any longer. There in the deep recesses of the mind he dances and stirs up that which needs to see day light and thus he engineers change from within, transforming and initiating.

He sends those waves to Hekate, who standing on the shore of your mind and weaves them into a form we can deal with and process without going insane. Here she administers them as her lessons and trials. They are a team, always together, even if only one is ever perceived.”

“How do you know that” he asks.

“Because I know the artist, intimately. He told me so.”

He shrugs and with a smile says “If you say so. You were always the smart one, I never understood half of what you said”.

I’m awoken by the sound of shrill cries, one of the twins is stirring. When I realize what has happened I offer my own tears in thanks for precious time spent with the blessed dead and the messages given to me from the gods.

It’s times like these I wish I had any artistic ability at all beyond stick figures. I’d love to reproduce that painting.